Even Longer Way To a Stable Cloud

Update on 2021/10/22: Since Wednesday the services are finally fully back, after a downtime of five month due to a recovery of the CephFS Meta Data Server. Our mail server was hosted on an external provider since years. This configuration was still a classcial setup, no dockerisation, no cloud. Just an installation of postfix and dovecot on a dedicated server with encrypted hard disks. That worked well, but then, after a power outage, the hard disk could no more decrypt. So I decided to restore the backup into the CephFS. Unfortunately, the 4GB RAM per machine were just enough for the normal workload. But when I unpacked a backup of about 50GB mails, the filesystem completely screwed up. Then the MDS was in recovering state. That used too much memory on the OSDs and on the MDS, so that they  crashed and restarted after a couple of minutes. I tried to recover that way, but iiit didn’t finish after a week, not after two, not after three. Since I could not add more RAM to PC-Engines, I bought 4 HPE MicroServer Gen10 Plus servers with a simple fast USB Stick for the Ubuntu operating system, 3 as OSD with 8GB RAM and a Western Digital 10TB harddisk each, and one as MON, MGR and MDS with 64GB RAM. They were delivered begin of September. The OSDs are fine, the recovery of the MDS was successful, but the rejoin state again used too much memory: Every 4min the server crashed. Unfortunately, the HPE MicroServer has only two slots for max. 16GB RAM each. Finally, I abused my LizardFS master server which has 160GB RAM as an additional MDS server. With that configuration, recovery was completed over night!

CephFS is stable enough to recover from this kind of disasters  Add enough RAM! The cheap PC-Engines with 4GB RAM are not enough. 8GB RAM seem to be enough for an OSD with 10TB harddisk. 64GB RAM is normally enough for MON, MGR and MDS in normal operation, but not necessarily in during disaster recovery. Since for MDS only one server is running and the others are standby, adding just one MDS with high memory during disaster recovery solves the problem. For the MDS and all other services, add a memory limit short below of your system memory, e.g. MemoryLimit=55G in section [Service] of /lib/systemd/system/ceph-mds@.service.

So my current stable cloud runs 10 dedicated Docker Swarm nodes, one manager and nine worker, and is backed by a five node CephFS, two manager and three OSDs. For setting up all these nodes, I use Ansible. All in all, there are 19 PC-Engine nodes, 3 HP ProLiant, 4 HPE MicroServer Gen 10 plus, a large HP and a Dell. Only my huge amount of multimedia data, terabytes of scanned documents, family photos and home videos, is stored in LizardFS, all other data is now stored in CephFS: 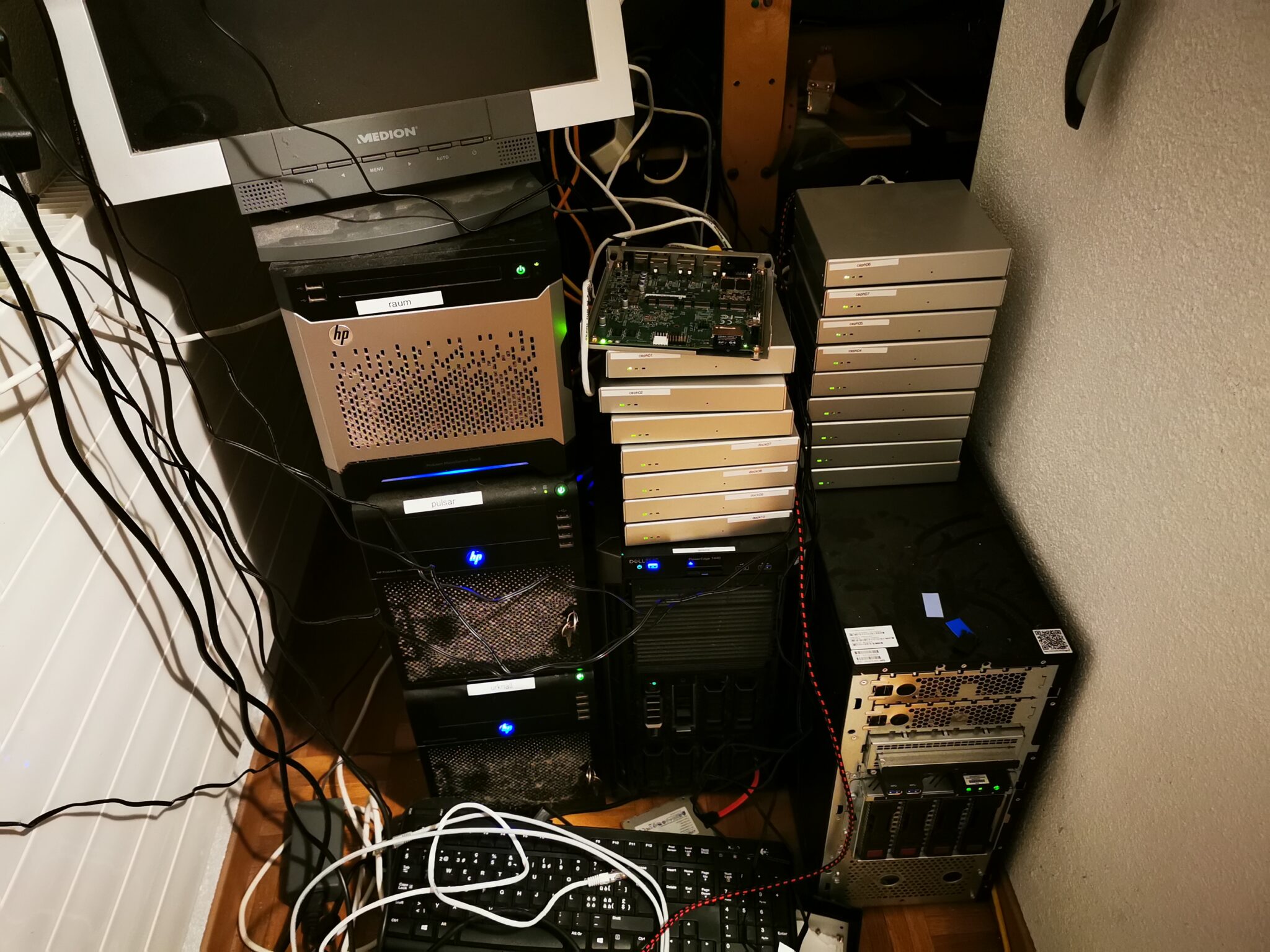